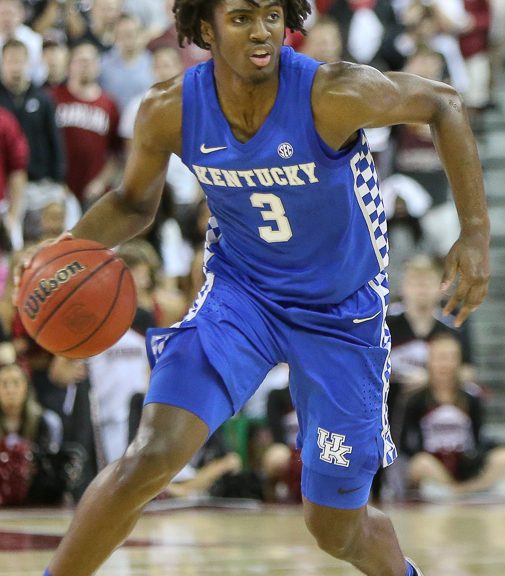 Tyrese Maxey is one of my favorite players in the 2020 NBA Draft. He was a key proponent of Kentucky’s success this year. While he did not put up the numbers some of his fans hoped he would, his contributions exceed what can be seen on the box score. Maxey is a smart slasher, relentless defender and strong all-round player.

Tyrese Maxey possesses an incredibly high work ethic based off of what has been said about him by his peers and reporters alike. Watching him play you can see that he has great basketball IQ and decision making on both sides of the court. These are very important values that some players with more natural talent are never able to match.

Tyrese Maxey projects to be a combo guard at the next level. While not quite good enough of a playmaker to run the point full time on offense, his 3.2 assists a game indicate that he does possess enough playmaking to run point in short bursts. While his lack of height may lead to him not being as effective of a shooting guard. However in an ideal situation Maxey should be developed as an off-ball point guard. Like a version of Patrick Beverley who has the potential to be a star on the offensive side of the floor as well.

Tyrese Maxey is listed at around 6’2 and 6’3. With the draft combine measurements coming up we will soon have a better idea of how tall he is. In today’s era of positionless basketball, height has become less of a concern. Players such as Marcus Smart have thrived at both guard positions at around 6’3 barefoot. Maxey does weigh at around 198 lb based off of previous listings. Following the combine I would not be surprised to see Maxey have increased his weight slightly due to the muscle he has put on following the early end to the season.

According to NBA.com, Tyrese Maxey possesses a 6’7.75 wingspan. This length will allow him to continue to be a good defender at the next level. At Kentucky, Maxey was expected to defend much taller players, and still was a capable defender. He has the lateral quickness to defend the point guard, while being strong and long enough to defend larger players.

Tyrese Maxey has NBA level athleticism already. He dunks with ease, and is able to play through contact. Overall he is a complete athlete, who is able to thrive on both the fast break and in a set offense.

Tyrese Maxey averaged 14 points, 4.3 rebounds and 3.2 assists per game. These are solid numbers while his 42.7% field goal and 29.2% from three leave a lot to be desired, many people believe that these are not indicative of how good he can become. Maxey uses his length and strength to beat smaller opponents, and uses his speed to get past taller defenders. This allows for him to score well at the rim.

Maxey’s 83.3% free throw percentage gives me hope that he can develop into a good shooter at the next level. Maxey’s shot form is pretty solid. At times his shot can be flat, but it appears that he has addressed it based off of his interview with Mike Schmitz on DraftExpress. In this interview we are shown footage of Maxey’s improvements he has made to his shot. I believe that within a couple years in the NBA Maxey can develop into a capable shooter.

While Maxey only averaged 0.9 steals a game, this does not show how effective he was at stopping ball handlers from getting past him. Maxey does not take many gambles and instead plays smart defense that benefits the team. This will benefit him at the next level as coaches are looking for players who put the team first. Especially as Maxey is likely going to come off the bench in his year or two in the NBA.

While Maxey’s statistics are not overly impressive, they do give a glimpse of his potential. If Maxey is able to put up these stats without a consistent jump shot, what kind of damage can he do once his shooting catches up to the rest of his game.

I believe that Tyrese Maxey projects to be an Avery Bradley type player, with much higher offensive potential. While this is nowhere near a perfect comparison, I view Maxey being at his best defending the point guard, while playing off-ball on offense. Avery Bradley thrived this season as an off-ball point guard playing alongside LeBron James. Maxey could thrive next to another point guard such as Luka Donic, D’Angelo Russell, Giannis Antetokounmpo or Ben Simmons.

Compared to Bradley’s stats in college, they put up fairly similar stats. Maxey is the best slasher, while Bradley was the better 3 point shooter at the same age. Maxey’s free throw percentage is significantly higher than Bradley’s. I believe that Maxey’s basement is slightly below Avery Bradley’s career, but his ceiling is significantly higher if he can deliver on his potential.

Tyrese Maxey could go practically anywhere in the first round of the draft. Different people have very different opinions about him. Some view him as an undersized shooting guard who can’t shoot, while others view him as a defensive menace with high offensive potential. I believe that with the 7th pick in the draft, Detroit is the earliest team on the draft board who will consider Tyrese Maxey. Detroit’s roster has very little to build around and would benefit from taking the player they believe has the highest upside. If Detroit are not buying into the potential of the other players available, they could take a gamble on Maxey’s potential and effort.

With the eighth pick in the draft I can see New York having interest in Tyrese Maxey. While it is unlikely he is by the Knicks, if New York views RJ Barrett as their playmaker (even though he has not shown great vision at the pro level), Tyrese Maxey would be a good off-ball point guard. If the Knicks draft Maxey, they would be buying into his upside. With New York targeting a point guard through free agency and trades, I don’t see them drafting Maxey, but I wouldn’t rule it out entirely.

The Suns love running Devin Booker at ball handler, however Booker lacks the lateral quickness to defend point guards. This is where Maxey steps in. Maxey could lock down the point guard position in the long term. In the meantime he would be a valuable addition for their bench. Maxey could potentially play the role that Cam Payne played very successfully in the NBA bubble for Phoenix.

With the 12th pick I don’t necessarily see the Kings drafting Maxey. But how fun would it be to see De’Aaron Fox and Tyrese Maxey’s energy on the court together. While lacking in height you would have an incredibly, fast, accurate and intense guard pairing. With Buddy Hield likely wanting out, there will be room at the shooting guard position. While I don’t think that Sacramento is a likely destination for Maxey, I think that he would make for a good pairing with De’Aaron Fox.

Again, I believe that Maxey will be at his best as an off-ball point guard, next to Lonzo Ball and Brandon Ingram he would be able to play this role very well for the Pelicans. While there are more natural fits like Aaron Nesmith and Tyrell Terry,  Maxey could be a great defensive long term fit for this team. On top of this, Jrue Holiday and JJ Redick would be great mentors for Tyrese Maxey.

Tyrese Maxey could easily fall this far in the draft due to a lack of natural fit. If Maxey is available for the Wolves they should not be reluctant in drafting him. In the long term Maxey could take a lot of pressure off of D’Angelo Russell on the defensive side. His slashing naturally compliments Russell’s passing abilities too. At the 17th pick, Maxey will likely have the highest upside available, it will come down to whether the Wolves are looking to win now, or in 2-3 years time. Either way, Maxey could still fit.

The Mavericks are an incredible fit for Tyrese Maxey. Maxey could be the perfect compliment to Luka Doncic’s game. While Seth Curry has had success guarding the point for the Mavs, Curry is 30 years old. Maxey will be ready to take that role in a couple of years. Dallas already has plenty of floor-spacing, taking away the pressure for Maxey to need to develop a consistent jumper immediately. I believe that Dallas is the best fit for Maxey in the draft, but it will be a matter of whether he falls to them, or if they are willing to trade up.

Tyrese Maxey fits the hardworking culture of the Miami Heat. Miami has built their team around high IQ players who are willing to play hard, and Maxey fits that definition very well. While Miami has plenty of capable combo guards, Maxey would still be a steal at the 20th pick.

Tyrese Maxey is one of those high energy players who is hard not to love. Maxey is NBA ready on defense, however his offense is going to need for him to continue putting in the hard work. I believe that team fit is going to play a big part in how good Maxey can become. As a result of this, it is hard to see where Maxey will be drafted, and whether he can thrive immediately. Overall I am buying into Maxey’s potential due to his work ethic, defense and basketball IQ.