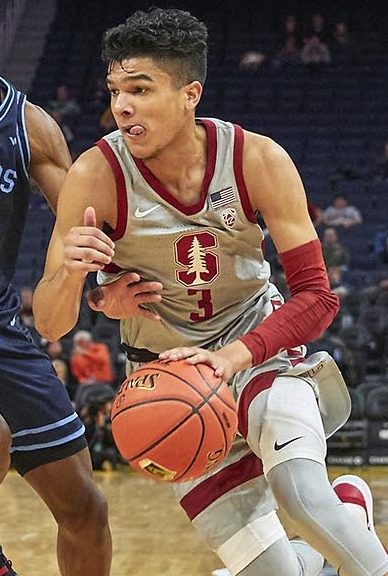 Tyrell Terry’s name has soared up draft boards over the last couple of weeks leading up to the draft. Terry is an exceptional shooter who has shown glimpses of smart playmaking. Terry’s shot form is very reminiscent of Kyle Korver’s, and he shoots an excellent percentage from deep on a high volume of attempts. The two big questions about Terry’s game are his lack of size and whether he can become an NBA level playmaker. With reports of Tyrell Terry’s growth, one of these questions may have been answered.

One of the biggest knocks on Terry’s game has been his lack of size. He has previously been listed at 6 foot 1 inches tall,  and only 160 pounds in weight. This lack of size would make him a terrible mismatch in a switch defense lineup. However reports appear to show that Terry has grown to around 6’2-6’3+, and increased his weight to around 174 pounds. This growth in height may lead to him being able to play at shooting guard as well, and will hopefully help him shoot over defenders better. While still very light, he has shown that he has the work ethic to work on his body. Physically, Terry is a work in progress, but the amount of strength he has put on in a short period of time is a great sign.

What makes Terry’s 40.8% from deep so impressive is he achieved this on 4.9 3pt attempts per game. This leads many to believe that he can possibly be developed into an elite three point shooter. One of the reasons I am buying into Terry’s 3pt shot is because of his high free throw percentage. His shot form is impeccable, and should translate easily to the NBA level.

While Terry’s stats do show how great of a shooter he is, they also show the question marks that come with his playmaking. Terry’s 3.2 assists per game is solid, but not great. If Terry is to be lead ballhandler he will need to increase the number of assists he averages per game. Terry averages 2.6 turnovers per game. This gives him only a 1.23 assist to turnover ratio. While Terry has shown glimpses of becoming a quality playmaker, he is yet to prove that he can be one consistently.

What surprised me about Terry from looking at both his stats and his highlights, is that he is a capable defender. Terry averaged 1.7 steals per game this season. What is more important than steals, is Terry’s ability to guard his man. Terry put up a defensive rating of 91.3 at Stanford. This ranked for the 5th best defensive rating in the Pac-12 division. For a 6’1, 160 lb point guard, this is truly impressive. If Terry has grown to 6’3+, this indicates that he could become a very good defender at the NBA level.

At this point I would compare Tyrell Terry to Seth Curry. Curry is a knockdown shooter and underrated defender. I believe that Terry has a much higher ceiling than the younger Curry brother, but his basement is definitely below Seth. Terry is a high-risk/high-reward prospect, he is not guaranteed to be a good or great player, but if he can become an NBA star player he will justify being reached on in the draft. Seth put up similar stats at Duke in his sophomore and junior years. If Terry can become as good a player as Seth then he will be worth a lottery pick, however he can become a much better playmaker with the right development.

Tyrell Terry’s draft range is very varied. His value is based on what he can become as opposed to what he already is. However what he already is, is an incredible shooter with high defensive and offensive IQ. However if his playmaking and shot creating can reach his potential ceiling, Terry could be the steal of the draft. Especially with the spacing demanded in today’s NBA. As a result of the uncertainty of where Tyrell Terry will be drafted I will only focus on teams which I either believe that Terry will be a good fit with, or would be the wrong team to draft them.

It is very unlikely that the Detroit Pistons select Terry with the 7th pick. However if their favourite prospects are off the board, and they feel like taking a risk, Terry could be a worthy prospect. Detroit is in a position where they need to draft a player with the best long term upside, with the uncertainty of this year’s draft, there is a chance a better player falls to them. If the Pistons reach on Terry, he could ultimately be a good player for Detroit.

This is again an unlikely place for Terry to be drafted. However Terry is a long term prospect. If the Wizards want to develop their future off of the bench, Terry could be a great pickup. However, there are better fits such as Patrick Williams and Devin Vassell who may be available.

Some people have projected Tyrell Terry to the Suns. It is an interesting fit. The Suns thrived in the bubble with Devin Booker as their lead ballhandler. While I don’t think Terry would be an immediate impact player, in the long term he could be a great fit. Terry could potentially be a 3+D point guard to pair next to Booker. Who the Suns draft will likely be based on who is available, if there are no players that fit their plans, Terry could be a nice pickup.

The Spurs will want to draft the player with the highest ceiling. There is a chance that Tyrell Terry is that player. Ultimately, I believe that they already have a similar player in Bryn Forbes. Although Terry has the higher upside, there are more players who fit more with the players that the Spurs already have.

The Pelicans have a very good young core. Terry would add to that. Lonzo Ball could easily share playmaking roles with Terry. With the Pelicans wanting to surround Zion Williamson with floor spacing, Terry could be a good fit. However with Frank Jackson and Nickeil Alexander-Walker, the Pelicans might have enough young guards already.

Boston have already worked out Tyrell Terry. The Celtics have some interesting decisions to make in the draft. They have three first round picks, and yet they are trying to compete now. With their picks they could look to trade for a good role player, or they could draft prospects to develop off of their bench. Terry could be developed through playing in the G-League and from playing against the Celtics players in training. With the Celtics issues not looking like they will be able to address their issues through the draft, taking a long term prospect like Tyrell Terry may be the answer.

With the Mavs thriving when they play Seth Curry as an off-ball point guard, it would make sense for them to draft a similar player in Tyrell Terry. However Terry has the potential to be a better playmaker, and likely can be developed as a ballhandler. If Tyrell Terry falls to the Mavs, this could be an amazing fit.

Tyrell Terry could be the steal of the draft. His playing style is tailor made for the modern NBA. He is a lights-out shooter who plays smart defense. Terry also has the potential to become a capable playmaker. Hopefully he can be drafted by a team that will take the time to develop him properly and get the most out of his potential. I believe that like Tyler Herro, Tyrell Terry will be a better NBA player than NCAA player.