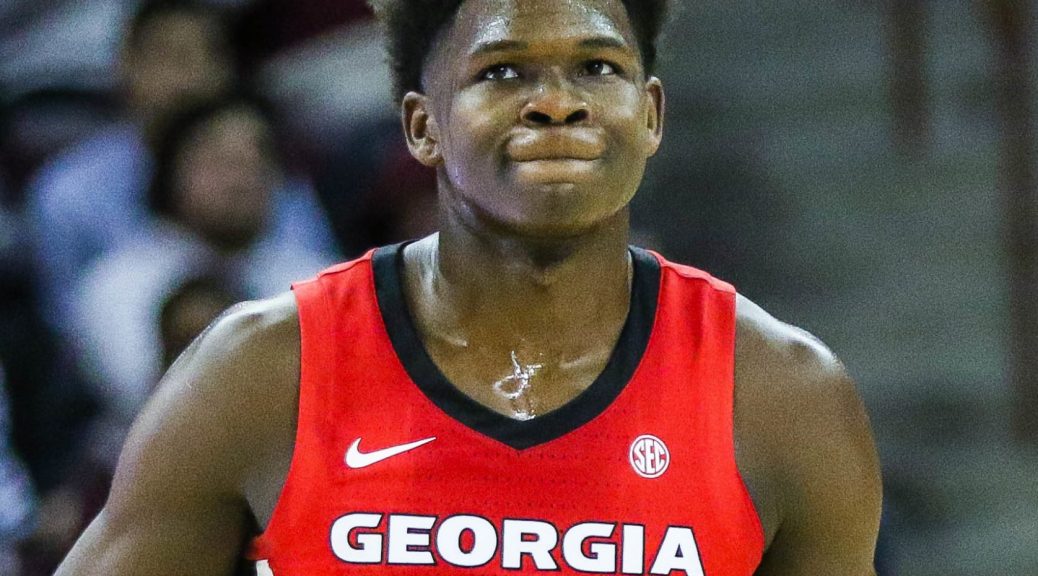 An Introduction to Anthony Edwards:

You can make an incredibly impressive highlight reel with Anthony Edwards footage. However you could for Dennis Smith Jr, Josh Jackson, Andrew Wiggins, and even Seventh Woods as well. So while Edwards definitely passes the eye test, there is so much else that needs to be given attention. What makes Edwards such a terrifying prospect is his lack of consistency. Some games he locks in and looks like a superstar, whereas other games he looks lost and merely mediocre.

Edwards needs to be drafted by a team that will hold him accountable, and take the time to go over game footage with him in order to help him learn. Edwards has games where he appears to not know where he needs to be on either offensive or defensive. ESPN posted a video on Youtube where Mike Schmitz and Anthony Edwards breakdown footage together. In this video Edwards is very critical of himself, while not being too harsh on himself. This is generally an attribute that indicates he will be very coachable, even though there is definitely a lot of coaching that needs to be done. A very promising sign is that Edwards has games where he knows exactly where to be and when. He is able to break his defender down off the dribble, create a jumper off the dribble and is able to slash off the ball. At times he even flashes glimpses of his court vision. For Edwards to reach his potential, he is going to need to be able to do all of this every night.

If I’m the Timberwolves I am very nervous about taking Anthony Edwards with the first overall pick due to the fact that Andrew Wiggins had very similar weaknesses. Every time Wiggins looked like he was going to break out into a star, he would go through a frustrating stretch of games. I believe that Wiggins’ development was stunted by the signing of Tom Thibodeau. Thibodeau is very harsh on his players, and that didn’t compliment Wiggins’ shy personality. Add in Jimmy Butler’s fiery and critical personality, and I think Wiggins’ confidence was completely obliterated. While I don’t think Edwards has a similar personality to this at all, I think that his lack of motor at times and inconsistency will definitely give the Wolves borderline traumatic flashbacks.  Unlike Wiggins, Edwards does not appear to have any fear of contact which will serve him well in the NBA as a slasher and penetrator.

From a physical standpoint, there is not much more you could ask for from Anthony Edwards. He has incredible strength and athleticism. A lot of young players need to grow into their bodies and build upon their frame, but Edwards looks like he will be ready from day one. According to NBA.com, Edwards possesses a 6-foot-10 wingspan. This is great length for a wing in the NBA. The only question about Edwards’ physical profile is his height. Most websites have Edwards listed anywhere between 6-foot-3 to 6-foot-6. Most websites however list Edwards at 6-foot-5. With the NBA now requiring players to be measured barefoot by their teams, I hope that the NBA requires all prospects to be measured by an impartial measurer. I also hope these measurements are provided to all teams.  This would allow for scouting parity around the league and allow for players to not inflate their stock with exaggerated  measurements. In the 2018 NBA Draft DeAndre Ayton was listed at 7’1, however he measured at 6’11 barefoot. While 6’11 is still a great height for a center, it is not nearly as unique as being a skilled 7’1 center. I expect Edwards to measure in at either 6-foot-4 or 6-foot-5 barefoot, however if he measures at 6-foot-3 his stock could take a hit possibly costing him the top spot in the draft.

Anthony Edwards’ stats are very interesting to look at. 19.1 PPG, 5.2 RPG and 2.8 ASTS are very impressive stats. However the percentages he achieved them on are concerning. A 40.2% field goal and 29.4% 3pt FG aren’t great, but not too alarming. Edwards makes up for his 29.4% from deep by making 50.4% of his 2-pointers attempted. His free throw percentage sits at 77% which is relatively good. Scouts often use free throw percentage to evaluate if a player has the shooting touch needed to transition to the NBA. Players like Lonzo Ball and Markelle Fultz both shot below 70% from the FT line. Edwards also had a solid 53.7% True Shooting percentage. Which while not elite, is pretty good for a player who missed so many 3’s a game. Edwards’ 7.7 3’s attempted per game contributes to his low 3pt%. With better discipline, gameplan and shot selection, this should be fixable for the next level.

Comparisons are very difficult to make for NBA prospects due to the fact that each player has their unique strengths and weaknesses. Due to Edwards’s build and athleticism, I see a lot of James Harden’s physical profile. However from a skill point of view I think Edwards compares more to Russell Westbrook. Obviously Edwards does not have Westbrook’s court vision or court awareness, but he does possess similar driving ability at the same age and a better shot form. In Westbrook’s sophomore year at UCLA he averaged 12.7ppg, 3.9rpg and 3.9asts. He did this on 46.5%fg, 33.8%3ptfg and 72%ft. This was on a near identical True Shooting percentage to Edwards with a 53.8% TS%. However In the wrong scenario Edwards could end up as an inefficient bench scorer like Dion Waiters.

I think that on a team that is patient with his development and commits to helping him improve long term, Anthony Edwards can become a bigger Westbrook, with less court vision and a lower motor. However I also think that he can become a better shooter and less ball dominant player than Westbrook. His development will be dependent on many factors such as his own effort, the coaching he receives and the situation he is drafted into.

Anthony Edwards is definitely the safest pick the Timberwolves can take with the first overall pick in the draft. But Gersson Rosas does not necessarily like to play things safe. In today’s small ball style of basketball, Edwards could easily play small forward next to a backcourt of D’Angelo Russell and Malik Beasley. Many scouts unfamiliar with what the Timberwolves have been up to this season have not paid attention to Malik Beasley’s great performance on the Wolves. On the Wolves Beasley averaged 20.7ppg, while shooting 47.2% from the field and 42.6% from deep (while attempting over 8 shots from deep a game). While this is only a 14 game sample and Beasley’s success could prove unsustainable, I think Beasley is going to prove himself as the floor spacing shooting guard the team wants. With the floor spacing of Russell, Beasley and Towns, I think Edwards could develop into a great small-ball small forward for the team.

Edwards’ height will play an important part in whether this will work or not. Realistically I think Edwards is going to need to measure at 6-foot-5 at least, in order to play small forward for the Timberwolves. If the Timberwolves decide that Edwards is a shooting guard that they would rather have over Beasley, he could easily fit into the backcourt alongside Russell.

It would be interesting to see how a young coach like Ryan Saunders is able to develop a player as raw (and as promising) as Edwards. Minnesota also has Pablo Prigioni as an assistant coach, who has done great work developing the young players on the Brooklyn Nets. David Vanterpool is possibly the best coach in Minnesota and has had great success with Portland over the years. I wouldn’t be surprised to see him promoted over Saunders as the season progresses. Edwards looks to benefit from this coaching staff, with Saunders focus on offense, Vanterpool’s focus on defense and guard play, and Prigioni’s talent at developing players.

If I am Anthony Edwards, I am wanting to be drafted by the Timberwolves as they already have a great young core in Karl-Anthony Towns and D’Angelo Russell. While it is not necessarily the biggest market, it offers him a team that should allow him to play to his strengths as a penetrator and slasher.

Golden State are most likely to pick the player with the most trade value. If Edwards is available, it will almost definitely be him that they would take. In the unlikely case that Edwards is available for Golden State at the second pick and they choose to keep him, it wouldn’t necessarily be a bad fit for him. The veteran leadership from Draymond Green, Stephen Curry, Klay Thompson and Steve Kerr would definitely benefit his development. However he may lack the touches he would need to become a star. Hopefully in this scenario he would put in the effort to develop his inconsistent yet promising defense.

Atlanta has the 6th pick, and I think there is absolutely no way Edwards falls this far, but I wouldn’t rule out the Hawks trying to trade up for Edwards. Anthony Edwards is from Atlanta, Georgia. Playing for his home team could help provide the motivation he needs to become a star. In terms of assets to trade up for Edwards the Hawks could potentially trade DeAndre Hunter and the 6th pick to Atlanta due to the fact that Hunter fits the style of basketball the Timberwolves are trying to play. John Collins or Clint Capela are also players that could potentially interest Golden State.

When it comes to Anthony Edwards, I believe that the reward outweighs the risk. While he is not a guaranteed star, he does have all the tools to become a star. Even if he ends up being a bust he still has the physical tools to be a capable NBA player. In an ideal world he will develop into the player I believe he can be, a shooting guard version of Russell Westbrook with more range and less playmaking. A Dwyane Wade lite type player.  I do think that Edwards will be a long term project however, and may appear to be a bust at first. If you’re the Timberwolves you will be worried about the comparisons to Andrew Wiggins, but this should also help motivate the organisation to make sure they do not repeat the same mistakes they did with Wiggins.